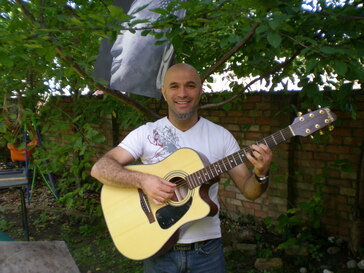 Hosted on Zoom by Stefan Freedman with featured singer/songwriter Divyarup.

Divyarup is a Brazilian-born songwriter, singer and guitarist. Stefan head-hunted him for this international online concert + dance party ​because he captures the essence of Brazil with his warm, melodious voice and rhythmic guiitaring. Divyarup moves effortlessly from soulful Bossa-Nova to upbeat funky-Jazz with a Latin beat. His own songs are heartwarming, nuanced, full of sweet sunshine and unconditional love.

Born in Brazil, Divyarup (pictured) studied music in 1997 at Universidade Livre de Musica Tom Jobim in Sao Paulo and later specialised in guitar and harmony whilst in London under the tutelage of Manu Pontes. His band – outside of Covid times – are a regular highlight in Camden Town’s music bar/restaurant Made In Brazil and their first album, ‘Tempo de Luz’ is well known among the Latin community and has been nominated for 5 Music Awards.

In between Divyarup’s two concert sets, Stefan Freedman will perform 2 classic Bossa-Nova songs. The second half of Divyarup’s concert will be upbeat with the invitation to dance, and we are expecting some young enthusiasts from Brazil to enliven the atmosphere.

The whole event is a party and a celebration of friendship. Brazilian music arises from an indomitable spirit of joy, energy and optimism. It has strengthened the people through many hard times. It’s just what we all need right now to lighten our hearts.