Bernhard Wosien was a German Ballet master, choreographer and professor of expression, education and dance. He is the founder of the modern form of Sacred Circle Dance, assisted by his daughter, Maria-Gabriele Wosien.
Born 19th September 1908, in Pasym, Poland, Bernhard died 29th April 1986 in Munich, Germany.

​Bernhard’s professional and artistic development included working as a dancer, assistant director, ballet master, dance educator, choreographer, dance scholar and draftsman. He began his career as a stage dancer, moving on to become a dance teacher, using dance and aspects of dancing in spiritual and curative contexts. Wosien ended his career as a Professor without a doctorate at the University of Marburg/Lahn teaching expression education and dance. He was also a staff member at the Friedrich Meinertz Institute (Special needs teacher training) and at the Heckscher Clinic in Munich, contributing to the development of movement and expression therapy methods for behaviourally and cerebrally damaged children.

​From 1976, Wosien introduced Circle Dance at the Findhorn Foundation, an ecological and spiritual community in Scotland. He used both traditional dances and his own choreography to develop ‘group awareness’. Wosien's approach was taken up by Anna Barton, both at Findhorn and across Europe in the 1980s, and this style of Sacred Circle Dance spread around the world.

Further biographical details can be found in the chapter ‘Digging Up Roots’ in the book ‘Dance Wise’, and in greater detail in the book ‘Journey of a Dancer’. 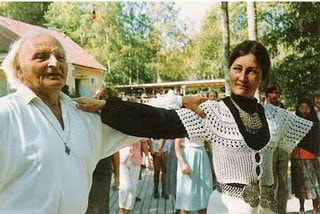 ​Left is a photo of Bernhard Wosien and Freidl Kloke-Eibl teaching in Uruguay. In the early 1980s. Bernhard found a spiritual home at Findhorn in Scotland, and was equally welcomed in South America, particularly Brazil.